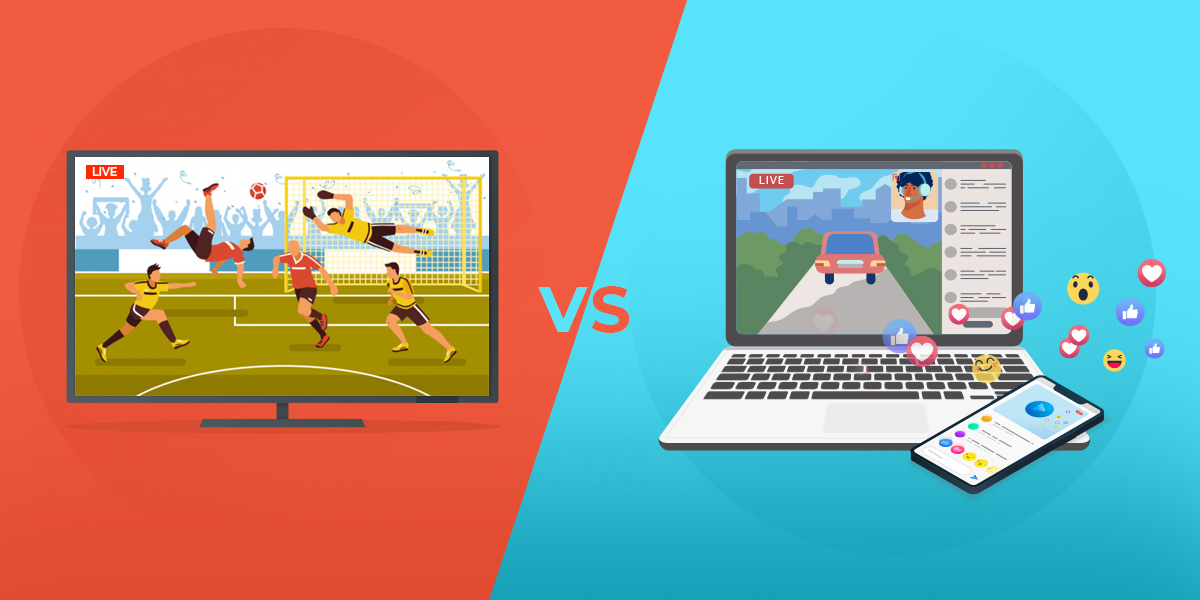 The term "live streaming" has entered the mainstream sentience as live content has grown in popularity over the last year. However, while live-streaming refers to a particular form of device and experience, it has now become a buzzword, a catch-all for any live video viewing, whether it is live streaming or live to broadcast. Some experts believe that streaming providers should be treated like conventional broadcasters, as they treat them as nothing more than modern unlicensed TV stations.

While live streaming and live broadcasting have their similarities, they are also intrinsically different for several reasons. But, what are the ways to tell the difference?

Read ahead as we are explaining the exact technological difference between Live broadcasting and Live streaming;

What does Broadcasting & Streaming mean?

Broadcast is one signal to many receivers - everyone gets the same signal, at damn near the same time (speed of light notwithstanding.) It is the action of rendering audio/visual content to audiences. In TV or radio, the two most common broadcast mediums, this means you have a big, high power antenna dumping the signal out at a specific frequency that anyone can 'tune in.' The broadcast can be either analogue or digital. Still, to my knowledge, it's rarely, if ever 'packetized.'
On the other hand, streaming is a 1 to 1 proportion where several viewers can play a video at precisely the exact moment and connect without any limitations. It is the action of capturing and displaying content via the fibre-optics mechanism in real-time.

Although the underlying base for live streaming and live broadcasting is much the same, which is often a kind of live content streamed over the internet, the parallels stop there. The way viewers view and interact with the content is perhaps the most significant distinction between video streaming and live broadcasting.
Live streaming apps and features are designed so that users worldwide can watch the same thing in real-time. However, the play is passive, just like watching live tv or broadcasting the World Cup earlier this year. The actor or host has no intention of the viewers participating, and the audience is not encouraged to do so. Though Facebook Live allows users to comment, most of these live events do not rely on them. In other words, user feedback on a live stream is the same as a comment on a static image or pre-recorded video.

Several video streaming networks are now threatening to supplant conventional live broadcasting. Furthermore, most cable and satellite providers have replaced their traditional television services with free streaming applications to compete. Streaming entails two simple requirements: an intelligent computer, a phone or wired tv, and an internet connection. There are no cables or dishes needed, and users can watch a stream both on the go and at home. A content distribution network captures, compresses, and also transcodes live content before delivering it to audiences around the world over the internet.

Switch We've Been Through Before

There was a radio craze in the early 1900s, similar to the personal computer movement in the 1970s and 1980s. Things got a bit chaotic as stations using the only available frequencies started competing with each other. By 1927, the Radio Act had begun to licence frequencies and moderately regulate radio broadcasters.
Similarly, by mid-2009, we made a quick transition to the digital era as television services transitioned to digital TV broadcasts, which meant that terrestrial stations, satellite networks, and cable providers exchanged analogue signals for digital signals. This new technology relied on digital video encoding for dissemination, effectively making analogue television sets redundant. Around this time, HGTV (high-definition television) went mainstream, and pay-per-view programming found its way to living rooms. A similar switch from analogue to digital can be embodied by the transition from records to CDs.
Whether it takes over-the-air, satellite, or cable broadcasting, digital signals have largely supplanted analogue today. Few nations are still experiencing the early stages of the digital television transition, but many have terminated analogue signals entirely.

If smartphone live streaming and live broadcasting become more common, the film industry and audiences can continue to understand the distinctions between the two distinct modes of live media. Keep following this space for more information related to Live streaming service providers, Live broadcasting services online and other virtual services.