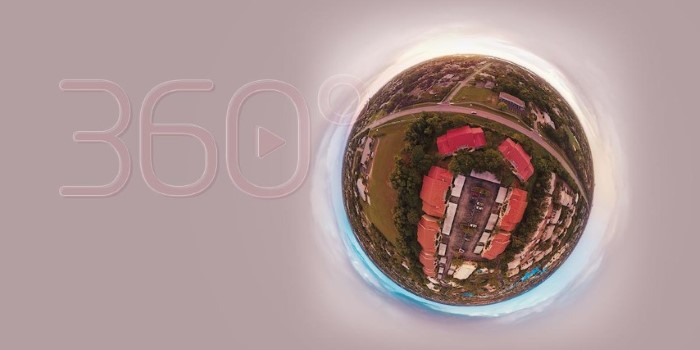 Frequently known as or spherical videos, 360-degree videos are an even better version of VR technology, where recordings of the real-world scenes are filmed in multiple view directions at the same time. As an end result, the viewer gets to control the viewing direction when the video is played back. While viewers have to use their mouse, touch screens or keyboard to drag the point of view around on display, the best viewer experience of 360-degree videos is generated on mobile devices and tablets, where the viewer has to simply move your device around to see all the different angles.

These videos are typically recorded using a specialised omnidirectional camera, or a collection of separate connected cameras that are mounted as a spherical array. It can be live action without the use of animation, captured from a 3D animated scene, or a mix of computer generated-graphics and clean edits. In any style and execution, this immersive technology surely knows how to generate views single-handedly. It breaks past the confine of screen borders and helps the viewers in entering the new horizon of video viewing experiences.

Today, everyone's familiar with this concept and also know how this feature has moved on from the extreme gaming world into the realm of the everyday video experience. Moreover, partially, YouTube and Facebook are the two major platforms that are to be credited for its progression. This feature has come a long way ahead and has a long road to ride. However, do you know how far have we gone with this technology?

Read ahead to know how this specialised stream of recording has become the buzzword of the era and how are they growing to get better. Also, get to know how exactly this video evolution has influenced the total brand experiences and marketing?

Where it all started from:

Back in 2015, we were only aware of the panoramic camera feature that was only limited to the 180-degree viewing field. That’s when YouTube jumped into the picture to give 360-degree videos its major shout out. From then and there, every individual who is connected to social media was going gaga about the new feature used to film video footage. Commonly identified as the forthcoming technology, 360-degree video recording has already established a mammoth like position. This entrenched niche is not just limited to those from the background of photography and videography, but experts from various proficiencies.

Currently, everyone is interested in trying their hand at this feature. The reason behind this curiosity is that it changes the viewer's perspective and culminates creativity in both video shooting, editing and viewing experience. It also comes with many pros, one of which is that it can be either non-interactive or interactive. * “Non-interactive 360-degree videos” stands for a video experience where the viewer does not influence the viewing experience outside of perhaps pausing the video or moving their head to take in different 'camera angles'. * “Interactive 360-degree videos”, on the other hand, are experiences where the viewer can interact with the other interactable elements by using a gaze or a controller.

It creates an excellent opportunity for creators to explore a variety of industries that preferred such content in a marketing or entertainment form. While some of the production houses have already started working distinctively in this area, there are other businesses also who are getting curious about the elevation of technology. Fields including travel marketing, sports, IT companies, social awareness organisations, movie makers, retail & products demonstrations, event production, post-production process, etc, there are endless faculties that are using new-age technology content in building and selling new products that cater to or work in the stream not only 360-degree but also virtual reality, augmented reality, mixed reality, light field technology, 360-degree and more.

Advances in the marketing lobby:

In terms of online product marketing, it not only immerses the customers but can also show them exactly what the product looks like and how it interacts with the world surrounding it. Some of the biggest brands were the first ones to use 360 videos in marketing, and currently, the list is continuously growing. With this all-inclusive feature, the competition is getting intense as every brand sets a new demographic for others to surpass. This With such wild potential that flows for innovative interactions, and the ability for users to move through video experiences without needing to stay anchored to the original viewpoint of the capturing camera.

Such hi-tech technology is no longer a field of curiosity to a mainstream product range, where products are getting more and more consumer-centric. We are so close to shutting the doors on the testing stage as the technologies are developing at a breakneck pace while making more products that cater to the needs and interests of the buyers.

This is just the beginning, as there are many ways by which anyone can be a part of this immersive video experience. And by that, we are not just talking about viewership but also creation. There are even free video editing software developers available in the market who have started implementing the capability of 360 footage processing for all masses. The selection pool is not yet comprehensive enough for everyone to dive in, but it is estimated to be a must-have feature by the end of 2019.

With so many things in our hands, it will be interesting to watch the developers introduce the new age products that can be used by anyone and everyone in their daily lives. But, till now we have just scratched the tip of the iceberg. So, sit back and keep on twiddling your fingers as you enjoy the time travel to the realm of cutting-edge video technology of the future.